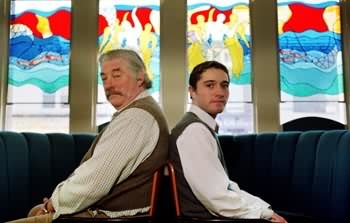 Five go to Edinburgh (and meet a sixth).

All in honour of Gareth playing Sir Toby Belch in Shakespeare's Twelfth Night. This being a weekend trip, we got in some other cultural activities as well.

First up was the National Gallery, this being a couple of hundred yards from the main train station in Edinburgh, free, and in possession of a free place to leave luggage, hence an excellent meeting point for diverse and sundry Lystians. I dragged my Luggage (well, it doesn't have hundreds of dear little legs, but in other ways behaves much like the real life item that inspired Pterry) over, and found a nearly silent Judith hanging over the railings outside, attempting to attract my attention. This was somewhat difficult, given that at the moment her version of a shout is being able to speak at something approximating half the decibel level of a normal speaking tone. We wandered inside, and were shortly joined by Chris-from-Middlesbrough and Janet. Edinburgh resident Katharine also joined us, although she couldn't stay long, being otherwise engaged for much of the weekend. Some ten minutes later, and still no sign of Chris-from-Germany. Judith went off to look inside the gallery, just in case, and I braved the winter winds whistling through the door every time it was opened, and removed my jumper and positioned myself opposite the front entrance where pretty much the first thing anyone coming into the gallery would see was a Redemption teeshirt. The first person to stop and examine the teeshirt was greeted with "Are you Chris?". She was, so we found Judith, and wandered in to admire some culture.

Judith and I had been to the gallery on our previous trip to see The Clearing, and dragged the others over to view our favourite bronze - The Wrestlers. Beautiful little bronze copy of Ye Ancient Piece of Marble Sculpture. The gallery shop does not have photos of any of the bronzes <sulk>. I noted the artist and title so that I can go on a hunt for photos.

A pleasant hour or two spent in the gallery, affording Judith and I the opportunity to look at some of the rooms we'd missed on the first time around. Some stunning art, but my favourites this time were a pair of paintings depicting the quarrel between Oberon and Titania, and their reconciliation, from A Midsummer Night's Dream. One of those works where the more you look at it, the more you see, little tiny pictures within pictures within pictures. I bought a print of one of them the next day.

Off to the station to catch the train to Musselburgh - or in Chris and Janet's case, wave to it as it left the station. Musselburgh station does not have a taxi rank. It does have an information board that includes a contact number for taxis. It does not have a public telephone. I have a company-issue mobile phone, which I had brought with me just in case - thank god.

We got there in time to have a chat with Gareth before the show. He told us a bit more about the play he's doing in Salisbury next month - Equus. Sounds well worthwhile, and I'll be going if I get the opportunity.

And on to the play itself. Quick plot summary - twins Viola and Sebastian are shipwrecked, coming to shore some distant apart and each believing the other to be dead. Viola disguises herself as a man for protection, and takes service in the household of the Duke, Orsino. Orsino is smitten with love for Olivia, who is in mourning for her brother, and will consider no suit from any man. Orsino sends his new manservant to plead on his behalf. Complications ensue when Olivia falls in love with "Cesario", who in turn is in love with the Duke...

Olivia is also the object of love from both her steward Malvolio, and the knight Sir Andrew. Her drunken uncle Sir Toby Belch (played by Gareth) has his own reasons for meddling in these affairs of the heart.

Life gets even more complicated when Sebastian turns up in town, as he and Viola are identical in appearance, and various people mistake them for each other. Amongst other things, he sees no reason to run away when some wealthy lady sweeps him up and insists on marrying him:-)

It mostly gets sorted out in the end, but there are some dark undertones for all that it's one of the comedies.

It's been put into a modern setting, placing it in a fashion house owned by Olivia. This works extremely well, apart from one tiny hiccup at the end. Amongst other things, it allows a modern audience to instantly identify the personalities, the status people have, and the power structures, something that the audience in Shakespeare's time would have been able to do from what was to them contemporary clothing. This starts with the very first scene, when Orsino enters by climbing out of his private swimming pool and going over to lie on his sun lounger, clad in nothing but swimming trunks. Nicely done, using a ladder in the orchestra pit, and lighting to make it look like a pool. It's quite obvious that this is a wealthy man of leisure. The place of the musician(s) playing in the background in the original setting is now taken by a ghetto-blaster by the sun lounger, the first of several wonderful touches in translating into a modern setting without losing any of the meaning.

The play is very much an ensemble piece, with most of the roles having a fair amount of stage time. Most of the acting was excellent, my personal favourite (besides Gareth, of course) being Maria, Olivia's chambermaid. She is superb, and the actress (Vicki Lidelle) manages to make a Scottish accent sound right in the role. The only slight disappointments were Sebastian, who was a little weak compared with the others (the actor is still at drama acadamy, and fairly inexperienced, so didn't do too badly considering), and the initial scenes with Orsino. Unfortunately a Scottish accent was not quite the right thing for that role - it plays merry hell with the cadences of the poetry.

The language has changed, of course, and a lot of the jokes were unintelligible to a modern audience not equipped with a study guide. This was partly made up for by the use of sight gags, such as Sir Toby pissing in the flowerpot. With his back to the audience, ladies, so settle down. The best one of these for me was the scene where a forged love letter is left in the garden for Malvolio to find. In the original, Toby, Sir Andrew and Fabian hide in the boxtree to watch. In this version, they hide behind a rack of clothing from the design rooms. Malvolio strolls about the stage while reading his letter, blissfully oblivious to the fact that the clothes rail has sprouted three pairs of eyes and is following him about the stage. The three conspirators duck behind the rail every time Malvolio turns around, then peer over again.

There is also effective use of body language to convey some of what is going on. Most of the cast use this, but the actor playing Malvolio (Kern Falconer) is superb. He only had to look down his nose at Toby and Andrew to have the audience collapsed in hysterics. Gareth's first appearance is early, in the third scene. Sir Toby Belch, uncle to Olivia, is a drunkard with an occasionally nasty sense of humour, and a talent for using people. He is currently using Sir Andrew as a source of finance for his drinking binges, which is why he is encouraging Sir Andrew's pursuit of Olivia. He frequently appears on stage with a bottle of red wine clutched in his hand, the level of which drops during the course of the play. Gareth is apparently getting rather fed up with the taste of Ribena, after 2 pints a night:-) It's an excellent performance, with a darker edge running under the buffoonery. Sir Toby is played as the sort of drunk who can seem charming and then turn nasty in a split second, then flip back to being charming. Gareth's size and presence add to the effect.

One interesting variation in this version was the way the relationship between Sebastian and Antonio is played. I thought it must be just my filthy imagination, but Judith assured me at the interval that it wasn't. Antonio is the sea-captain who rescues Sebastian after the shipwreck, and there are some fairly passionate speeches about his love for Sebastian. In their first scene, they are sitting on the edge of a bed, both putting their boots on. It's not explicit, but the body language reinforces the impression that they have not just been sleeping. Later, Antonio is arrested by the Duke's men, and marched away in handcuffs, in the belief that Sebastian has denied knowing him. A dark, sullen hunk in handcuffs, betrayed by his lover. Near the end of the play he gets to stand handcuffed and held by guards, watching as a woman claims to have married his lover - who is now denying both that _and_ knowing Antonio. The one minor problem with the A/S slant put on the performance is that when all is sorted out, and the fact that both Sebastian and Viola survived the shipwreck has explained the various goings on, Antonio then seems to be quite happy to watch as his boyfriend is carried off by Olivia.

I liked the set design. Neat mechanism for indicating scene changes, using a sliding platform on each side to roll out a selection of furniture when required.

It's now getting to be a game of "spot the actors we've seen on stage with Gareth before". Two of the other actors had also been in The Clearing, and we think one was in the pantomime at Dundee a couple of years ago, although I can't find my programme to check.

It's an excellent production, and a lot of fun. I'd recommend that anyone who has the chance go to see it. Sadly, it's not going on tour - a waste, in my opinion.