I joined Space Models in Feltham Middx at the age of 16 in August 1976, straight from school into an apprenticeship with the company that had built models for "Thunderbirds", "Joe 90", "Space 1999" and many James Bond movies. I had built a large scale "Eagle Transporter" as a demonstration of my abilities and was delighted to get a job there.

For the first year of my employment there I was ,as an apprentice, relegated to the mundane task of preparing thousands of aircraft models destined to sit on the boardroom and office tables of various airline executives. I would jealously watch the elite team of modelmakers on the top benches as they built models of all kinds for the movies and television.

After some time I was called into the office by the workshop foreman and presented with a sketch drawing and a cardboard model of a spacecraft called the London for a new TV show to be called "Blake's 7", the model to be completed in three weeks along with several other craft. I was a very happy fellow.

The sketch and model had been made by the Art Director on the show, Ian Scoones(of "Thunderbirds" and "Hammer House Of Horror" fame) alas, my copy of that original drawing is no more. The cardboard model was a rough guide to the overall shape and I immediately set about producing working drawings using these as a guide. The model was built from Perspex sheet and detailed with styrene and plastic kit parts, in particular parts from the famous Airfix girder bridge kit which had adorned so many of the"Thunderbirds" models. In a later magazine article Martin Bower questioned whether their inclusion on the models was an "in joke" (Space Models had built several models for the series), in fact they were used because these were the particular details that Ian Scoones had stuck onto the reference model. I simply copied them, although at that time I didn't realise that Ian had been very involved with the production of Thunderbirds, so perhaps it was his little joke! 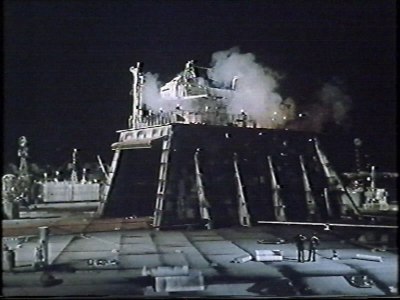 The design of the craft featured (in theory) removable container units and a travelling crane arrangement which would have lifted the units out. There was a pylon at the front of the craft to support the pole from which the crane hung, this was fabricated from brass and soldered together. As far as I remember the idea was that the ship had been converted from a cargo craft into a prison ship by the Federation.

The model had two holes drilled underneath for the inclusion of the Pyrotechnic charges that would simulate the rockets used for launch ( I remember we had lots of fun setting one of those off with a blow-torch! Following completion the model was finished in matt white. I understand that following the delivery of the model to the client Martin did some extra detailing work and added undercarriage prior to filming. I was also asked to build a tiny version of the London for shots where it came across the huge Liberator for the first time.

The BBC supplied a nice 'LONDON' decal which was fixed on both sides of the front section of the craft.

The Liberator was also under construction at that time and I assisted with the detailing of that model. It was constructed from Fibreglass mouldings cast from wooden masters turned on the lathe. The rear "engine" section was produced from heat moulded acrylic blended into the hull. Tape was used to apply the lining across the clear section. The engine glow effect was from a simple household bulb fitted inside the perspex moulding, this was to cause awful headaches as the bulb was invariably left on and caused the back end of Liberator to melt on several occassions. The model was also tremendously heavy as the front sections of the weapons pods, or outriggers, were made from solid brass. I understand that Martin Bower was called in eventually to build a lighter version.

I remember also building a "Bullitt" craft in two sizes, although I can't remember which episodes they featured in.

Other items constructed by the company for the series at that time were the original Federation weapons (perspex rod with a bulb behind) and a security camera device featured in the opening credits.

I remember the series with great affection as it was my first break into the world of professional modelmaking, a career that has continued for me now for 23 years. I wouldn't change a day of it, I've been one of those lucky people who's hobby as a kid became their profession.

Ian Scoones was, on the whole dissappointed with the series. His vision was of a BBC equivalent to Star Trek, but in a conversation a couple of years after the show he confided to me that the budget just wouldn't allow for all the stories he wanted to film. I think he must be quite content with the huge following that the programme continues to generate after all this time.

Simon now lives in Australia, he is currently starting a company to produce definitive TV and Film spacecraft replicas (finished models rather than kits), he welcomes inquiries.

You can see some of his artwork and model making at Underman's 2001 pages.

Back up to Essay index

Back up to Blakes 7